This article is written thanks to our student Siddharth Mohan

Linear systems have a property where the relationship between the input and output can be expressed by a straight line for example V versus I relationship of a resistor.

We can define a non-linear system y as a function of x as per the equations indicated below : 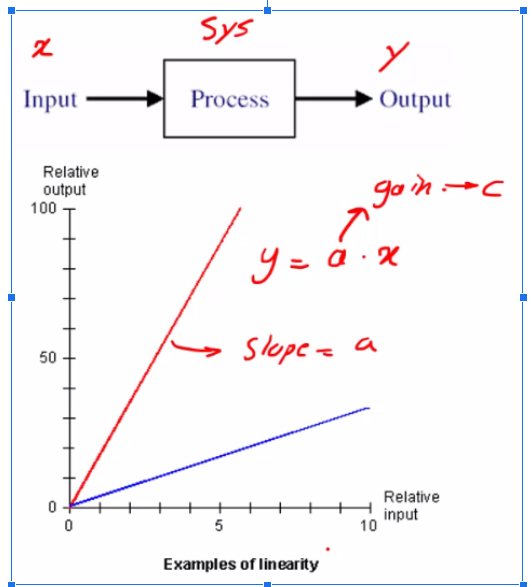 Non-Linearity : the output has linear part but there are many more extra terms which cause non-linearity like the 2nd order, 3rd order and so on… The higher order terms are very small comparatively hence can be ignored unless sensitivity is very critical.

For example the MOS based differential pair the relationship between Vout and Vin is a non-linear one with the 3rd order term as non-zero. The 2nd order term is zero though (a2=0) for differential systems. 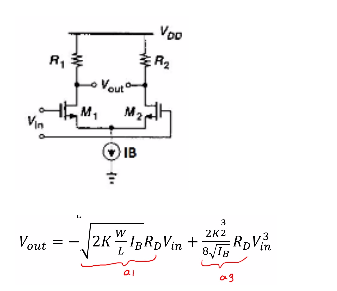 Suppose X -> 0 is very small then we can ignore even the 2nd & 3rd order terms in which case we can say that for very small values of X the system is linear. Or in other terms in non-linear systems the value of X is relatively big.

When calculating the gain of circuit we assume small signal analysis in which the input is assumed to be very small.  Hence Vout = gmRd*Vin

If the amplitude of Vin increases the system starts to behave non-linearly.

Problems due to non-linear system.

Suppose we have an input Acoswt and we have a no-linear system. Lets see what happens to the output. We can replace the input x = Acoswt 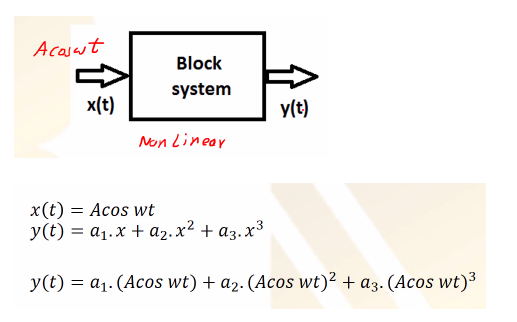 Using trigonometry we can express output y as : 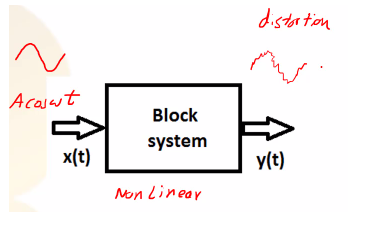 Ahsan Ghoncheh
Ahsan Ghoncheh Technical Adviser and Board Member at Rahsoft Ahsan is Founder and Technical Adviser at Rahsoft. He has worked on the latest technologies in the top semiconductor companies, Broadcom and Qualcomm. His expertise is in RF System, RF Test mainly working on WLAN and Bluetooth RF Characterization . Transceiver, Switches, WLAN and Bluetooth Chips Ahsan as a team member has worked on many devices and projects which results can be found most devices in any home or office and has ended up being used in development of products of companies such as Apple., Samsung, Panasonic,LG , Amazon and Google. He also has a great portfolio in the Aerospace and has been a member in the design team working on hardware designed to be used in the Consumer Aircraft of different airlines. He has also is the founder of Rahsoft which is a multi-functional company active in Application Development , Hardware and Software, with over 15 Applications and hardware available in the App Stores and market, Staffing Services servicing startups in the Orange County Area,Career Coaching as Well as Professional Education. The Professional Education Division has had over 1200 students enrolled and is one of the few complete online and onsite RF Certificates in the industry.

What is power in RF?